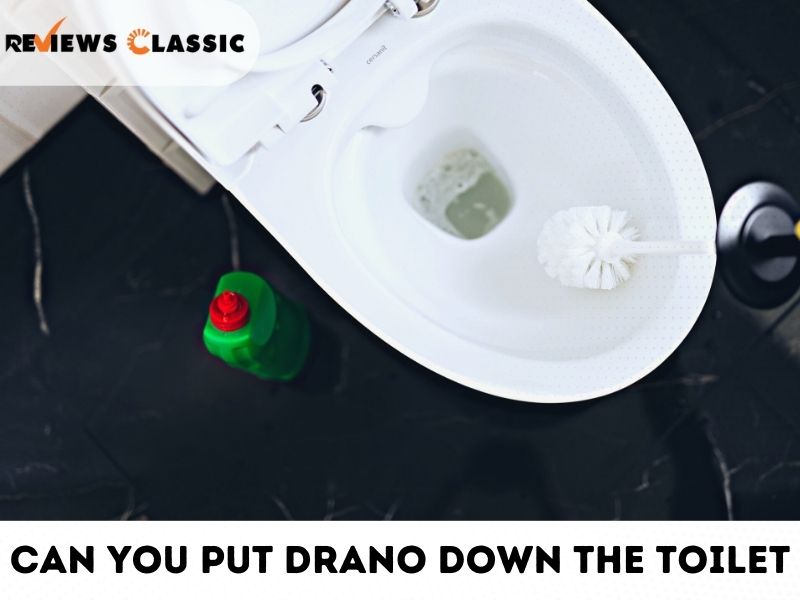 Can You Put Drano Down The Toilet? – Everything You Need To Know

Let’s face it, toilet clogging is quite inconvenient, and it occurs frequently. So, what’s the quickest way out? Drano is probably the first thing that comes to mind. In fact, it’s one of the most well-known chemical clog removers on the market today.

But hold on, don’t rush to a conclusion just yet as there is more to it. However, before we proceed, we must first answer the following question:

Can I Put Drano Down the Toilet?

When a considerable mass becomes lodged in the toilet trap, the toilet continues to clog because regularly flushed debris is more likely to catch and jam. It might also be the result of a backed-up septic tank.

Now, in this clogged-up situation, you should not use Drano, as it can cause your pipes and toilet to heat up. Why you ask, well Drano comes with different types, each tailored to a specific occasion by varying the components used in conjunction with the core lye-based recipe.

Drano dissolves whatever is obstructing a drain with caustic or oxidizing chemicals (such as lye). Heat is generated because of the chemical interaction between the Drano and clog.

These chemicals also generate bubbles and suds, which loosen the clog sufficiently to break free in sinks. 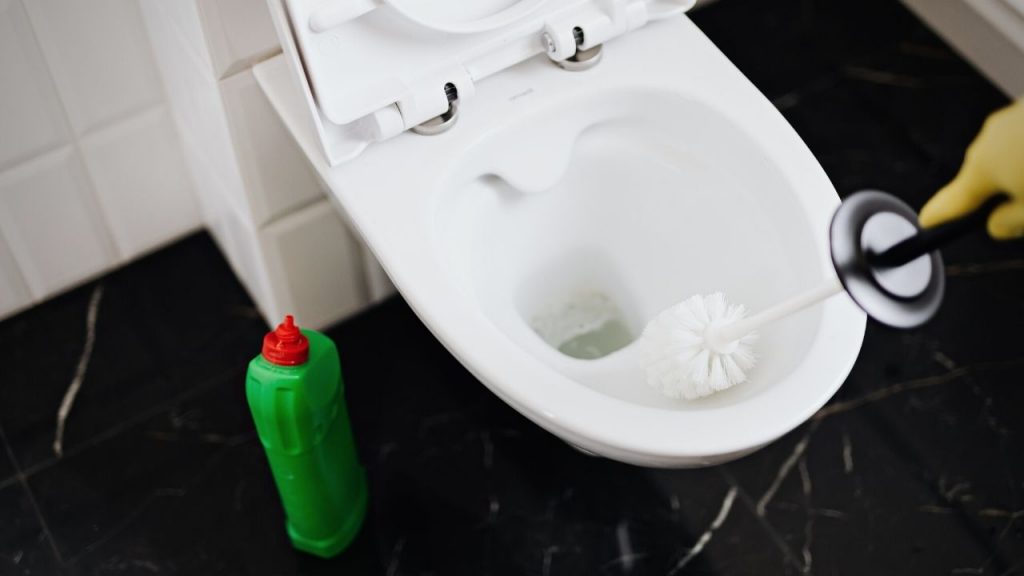 However, in the case of toilets, the tremendous heat might cause the porcelain to fracture at the trap or the bowl, necessitating the replacement of the complete commode.

Moreover, Drano does not dissolve a blockage immediately. It will remain in the toilet (or farther down the pipes) until the blockage has been removed. That suggests it’s still producing heat.

Therefore, using Drano to clear toilet clogs increases the likelihood of a chemical reaction occurring lower down the line, also the ensuing heating can destroy the pipes and the ceramic of the toilet.

There’s more. using Drano in the toilet might potentially be dangerous for your skin. For example, suppose you used Drano, and the clog isn’t moving, then you attempt to plunge it. You run the chance of accidentally spraying the sitting Drano on your skin, which might result in a burn.

Here is a fact. Drano is essentially sodium hydroxide, a powerful caustic, combined with surfactants. It is effective against grease and oils. The majority of toilet clogs are not caused by a buildup of grease and oils. It may have worked in some cases, but it should not be regarded as a “go-to” method for unclogging toilets.

So, Why Can’t You Put Drano Down a Toilet?

But how about Drano Max Gel?

Can You Use Drano Max Gel in Toilet? 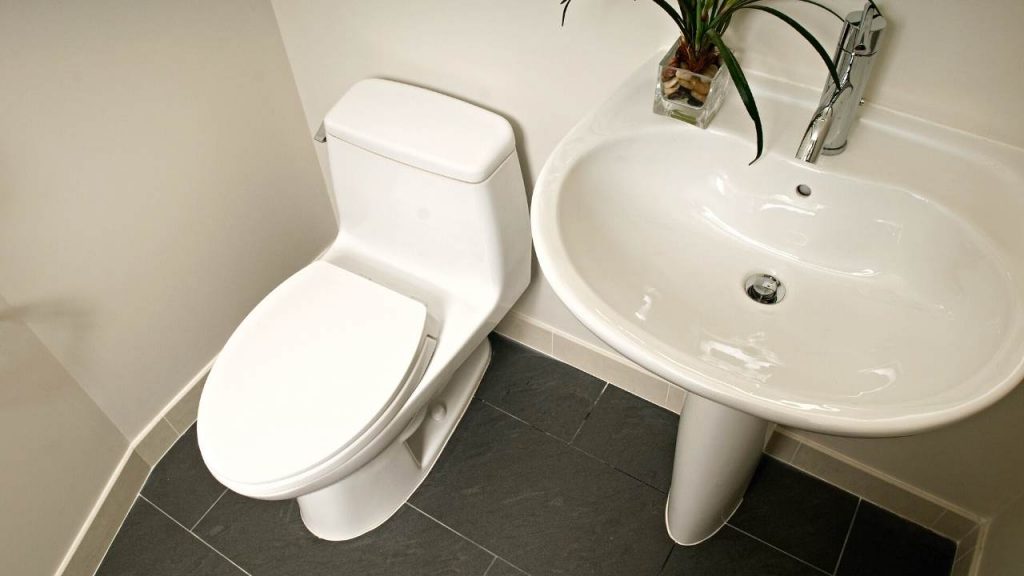 The main difference between a regular Drano product and Drano Max Gel is its thickness. Drano Max Gel is more than 50% thicker than conventional drain openers. Moreover, it works as a gel that adheres to clogs for a longer period of time, allowing it to remove blockages more effectively.

It claims to be a safe product for PVC, metal pipes, trash disposals, and septic systems. However, it is only useful to unclog bathroom sinks or kitchen sinks but not a good option for toilets.

In fact, all chemical drain cleaners should be avoided for toilets. Because they contain almost the same substances or other compounds that are similarly hazardous to toilet parts.

However, the only liquids you should consider are enzyme-based drain cleaners. They both are effective and risk-free.

As a result, to stay completely secure in this situation, you should consider different techniques for unclogging your toilet.

Can You Use Liquid Plumr in a Toilet? 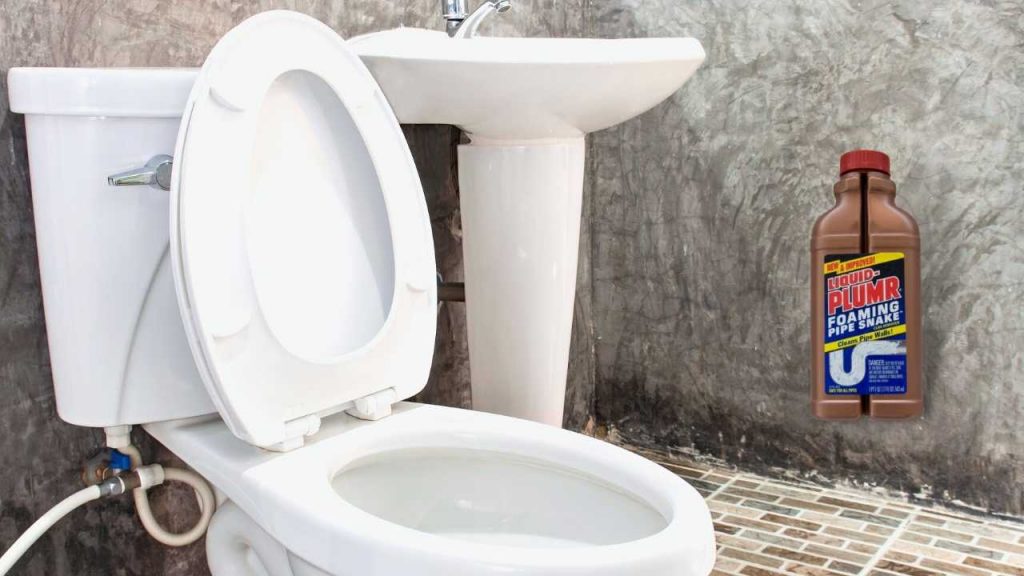 Using liquid plumr in a toilet is not a good idea. Applying It will create a pool at the bottom of the toilet, requiring you to use more to get past the trap region and into the downflow part of the toilet. Then, if it doesn’t work, you have that potentially toxic stuff in the bowl to splash if you plunge or simply coat your snake.

Moreover, it becomes a safety hazard while plunging or snaking the clog, in addition to potentially breaking the toilet.

Also, if the mainline linked to the toilet is clogged, drain solutions like these will have no impact, and you will need to have the drain professionally cleaned using power equipment.

So, How to Unclog a Toilet? | Chemical Drain Cleaners Alternatives 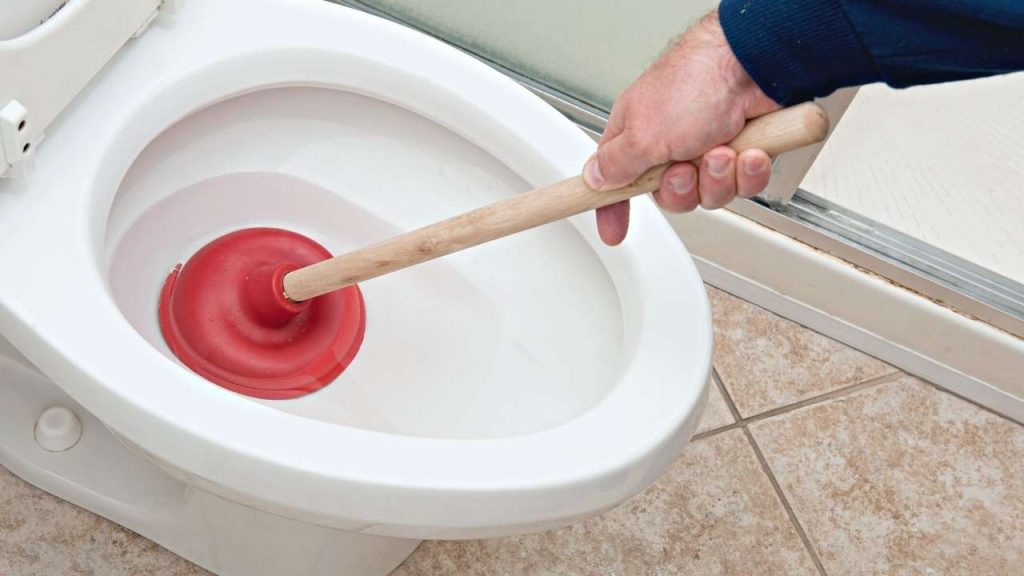 When you have a blocked toilet, there are several options you may take to restore your toilet to regular operation.

Here’s how to clear a clogged drain without using Drano or similar products.

It is preferable to use a natural cleaning for toilets rather than chemical items such as Drano. Replaceable ingredients include vinegar, baking soda, and liquid dish detergent work great in these situations.

You can start by pouring one cup of baking soda into the toilet. After waiting 2 – 5 minutes, then slowly add two cups of vinegar. When the vinegar and baking soda come into contact, a chemical reaction occurs, resulting in the formation of bubbles.

These bubbles start to rise. So, to prevent the mixture from splashing/overflowing the toilet again add vinegar a little more. However, you need to let the bubble mixture sit for a couple of minutes or a little bit longer and then flush the toilet to check if the clog is gone.

This method works every time. Though, If the toilet does not make a suction sound or drain correctly, the blockage may still be there and will require an alternative operation.

You can also use dishwashing liquid to unclog a toilet.

Toilet plungers are useful if you wish to use physical force to clear a blockage from your toilet. However, If you have a blocked toilet bowl full of water, do not plunge it immediately away. Use a cup and a bucket to remove the remainder of the water. You could wind up pouring water all over your face and the bathroom floor if you don’t drain it.

So, After draining the bidet toilet bowl, go ahead and plunge it. To correctly attach the plunger to the toilet outlet, the first plunge should be mild. Plunge aggressively after that.

If done correctly, the clog should be forced down through the drain pipe.

Do you know which is the Strongest Flushing Toilet!

If the plunger does not work, you should upgrade to a toilet auger, commonly known as a toilet snake. It has a spring coil down the toilet that pushes the impediment down the drain.

Toilet augers operate by pulling the clog out or shredding it into smaller bits that can readily go down the drainpipe. Basically, a toilet auger works directly on the clog, whether it is in the toilet trap or the drainpipe.

Here is an important fact – you should exercise caution while using a toilet auger to avoid scratching the interior of your toilet bowl. Therefore, try to guide it into the toilet outlet and then gently draw it out.

If you are experiencing chronic obstructions or blockages in more than one fixture at the same time, you should contact a plumber.

Plumbers have the instruments necessary to detect systemic issues deep inside the waste system that may be caused by tree stumps or septic backups.

By the way, Can You Flash The Toilet During a Power Outage?

Toilet blockage is a natural occurrence. It happens frequently, and there are several solutions to the problem. However, no matter what you use to unclog your toilet, using Drano or any other chemical-based drain liquids is not a good idea.

As previously said, these substances can cause harm to your toilet as well as make things difficult for you. Therefore, using chemical drain cleaning alternatives is the ideal answer in cases like these.

American Standard Titan vs Champion 4 – Which One Is the Best?

What is a Two Piece Toilet? – Everything You Need To Know