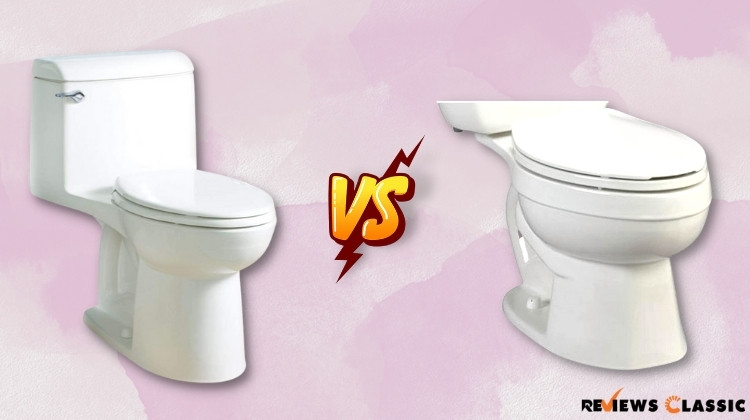 American Standard Titan vs Champion 4 – Which One Is the Best?

The American standard is a reputed brand with lots of high-quality toilet options. They offer a diverse range of toilets, ranging from high performance to standard style and all in between. However, the Titan and champion four are worth considering among their toilet models.

In terms of quality and performance, both these two toilet models show somewhat excellent performance. However, when you are talking about American standard Titan vs. Champion 4, it may be tough to determine which one is the superior alternative.

When comparing two toilet models, there are several aspects to consider. So, in this article, we will compare the American standard Titan vs. champion four and determine which one is best for you.

So, let’s start with the features first and find out the fundamental differences between these toilets. 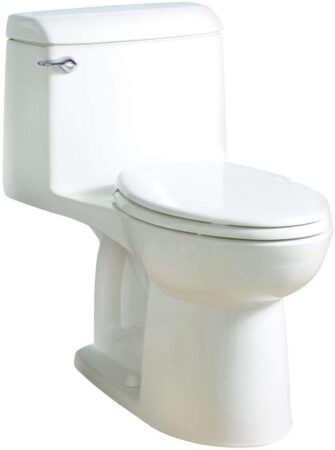 From the specification table, you may get a sense of the features and qualities of American Standard’s Champion 4 model. This elongated one-piece toilet is a quality toilet best known for its performance.

The Champion® 4 Flushing System provides the best clog-free performance. It is a faster and more powerful flush that can move up to 70% larger mass than a standard toilet.

Though the flush is powerful, it generates less noise and consumes little water while in action. This low-consumption flush technology uses only 1.6 GPF helping you save water in the process.

This toilet features a one-piece design. The main advantage of one-piece toilets is they are easy to clean, and there is less space for bacteria to grow.

Moreover, because the entire unit comes in one piece, installation is more simplified than two-piece toilets.

With the champion four toilets, you will get a super smooth mirror-like surface. It is a silver-based, double-coated surface that prevents the formation of stain and odor-causing bacteria, fungi, and mildew.

In general, the EverClean surface is significantly easier to maintain and stays cleaner for longer than other toilets. So, it’s an added advantage in terms of toilet models.

The champion four has an elongated siphon action jetted bowl. Elongated bowls are considered more hygienic. Moreover, the larger surface area of the bowl makes it easier for people of all ages to use the toilet.

The longer bowl size is also required for ADA compliance since the longer/wider bowl is more comfortable for persons with mobility issues.

You will get a slow closing seat with the American standard’s champion four toilets. Slow-close seats are an added benefit for toilets since they reduce seat slamming, resulting in a quieter and more serene user experience. 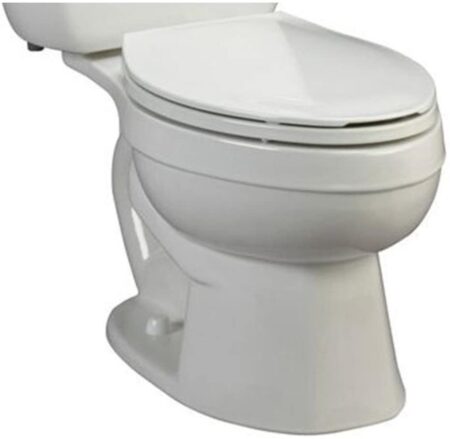 The build material of American standard Titan is Vitreous china material. It is a long-lasting substance with an enamel coating on ceramics or porcelain. This coating makes the porcelain denser and more challenging.

Furthermore, the vitreous china creates a glossy appearance, making your toilet more attractive and keeping with your bathroom’s overall aesthetic.

The champion four from the American standard also features this vitreous china built.

American standard’s titan pro features the ProOne flushing system. According to the company, the ProOne flushing technology received the best possible grade in their most recent independent MaP testing, processing up to 1,000 grams of solid waste in a single flush.

So, it’s indeed a powerful flushing system. However, the flush is not just powerful, but it also saves water, consuming only 6 liters (1.6 gallons) per flush. In other words, you get a one-flush performance while using less water.

The Titan Pro toilet is a two-piece unit with an elongated bowl for added comfort. Because of its two-piece structure, this toilet is significantly lighter and easier to maneuver within a space.

Also, The elongated bowl design of the American standard titan pro is perfect for people with mobility issues.

The titan pro has a big 3-inch flush valve compared to other standard toilets. Large flush valves enable the massive majority of the water to descend into the bowl at once, generating a large amount of power capable of moving a significant volume of waste at once.

The American standard’s titan pro has a 2-1/8 inch trap way. So, it’s significantly bigger than the normal trap ways, helps prevent clogging, and allows for free movement of waste.

American Standard Titan vs. Champion 4 – the Pros and Cons 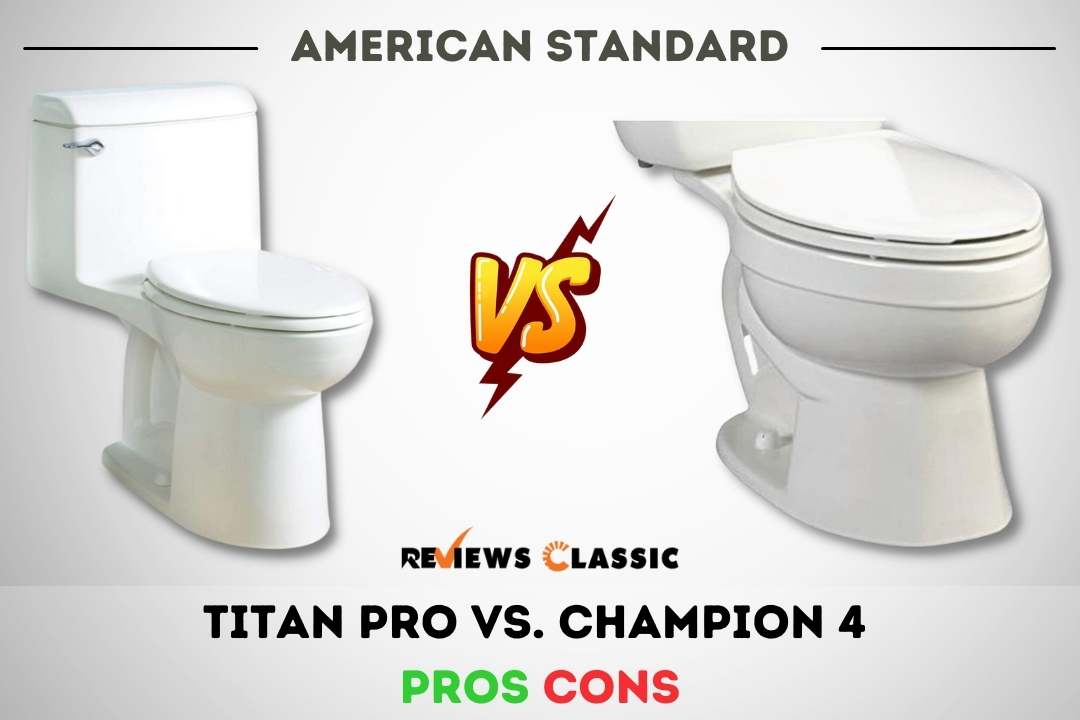 So far, we’ve gone through the specifications and an overview of these two toilets. So you’ve probably gotten a sense of the benefits and drawbacks of both of these American standard toilet models.

However, to make the comparison of American standard Titan vs. champion 4 more specific, let’s examine the merits and downsides of both items in greater detail.

American standard titan vs. champion 4 – What are the differences? 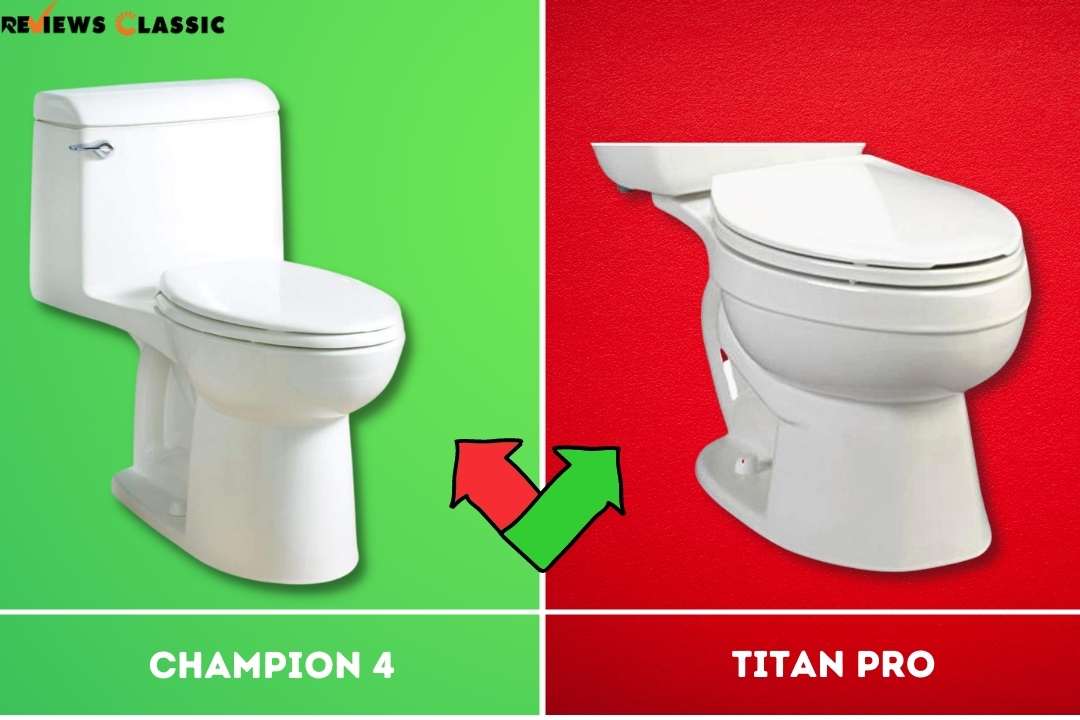 So, by now, you should have a decent understanding of both of these American standard toilet models. However, to help make your decision more precise, let’s discuss the core differences between American standard titan and champion 4.

So, as you can see, there are some major differences between these two toilet models from the American standard. In reality, these distinctions may significantly impact your toilet performance.

As you can see, both the titan and champion 4 toilets are well-functioning and well-designed in their respective fields. However, the differences in several specific aspects of each of these toilets provide room for your choice to make.

After comparing both these toilet models, the right choice will be the champion four which is a better option than the titan pro. Because champion four features an EverClean surface that is easy to clean.

It has a slow-closing seat, an excellent addition over the Titan, as it doesn’t feature one.

Champion 4 has more color variants and is also WaterSense certified. Moreover, the champion 4 is a right height toilet. Toilets with the right height are much more comfortable for people of all ages.

In the end, no matter what model you choose, it’s crucial to understand what is suitable for you and your family before coming to any decision.

There is no obvious winner in this scenario because both one-piece and two-piece toilets have benefits and drawbacks in their respective domains.

Two-piece toilets are easier to move and less expensive. Also, if any of your toilet parts break, you don’t have to replace the whole unit, as it comes in separate parts. On the downside, two-piece toilets are difficult to clean, and there is always a risk of water leakage from the tank.

In the case of a 1.6 toilet, it’s less water-efficient compared to a 1.28 toilet. Furthermore, 1.6 GPF toilets have a wider flush valve, allowing more water to reach the toilet bowl, resulting in a powerful and more effective flush.

On the other hand, a 1.28 GPF toilet uses less water than a 1.6 GPF toilet. So, if you have a larger household or want to save as much money as possible on your water bill, the 1.28 toilet may be a good choice.

Should you have an elongated or around the toilet?

Elongated bowls are often seen to be more appealing and comfortable than round front bowls. However, this is a matter of taste and can be influenced by an individual’s height and weight.

Elongated bowls have a larger bowl size and are considered more hygienic compared to round bowl toilets. Longer bowls are also required for ADA compliance, and wider bowls are often easier to use for persons with mobility impairments.

On the other hand, if space is an issue for you, round-front toilets are the one to look for.

What is a Two Piece Toilet? – Everything You Need To Know

How To Use Plunger On Toilet – Everything You Need To Know